Legal Practitioner, Gabby Otchere-Darko has been roasted on social media for telling traders to be considerate when charging diasporans for their goods and services.

Taking to Twitter to advise traders, he said “Message to traders and all service providers in Ghana: If you want those who have returned to return please don’t overcharge them. We beg!”.

This was after some diasporans posted on social media to register their displeasure about the abnormal charges on products and services because of the Year of Return programme.

But tweeps who disagree with the sayings of Gabby Otchere-Darko noted that the character exhibited by Ghanaian traders and other service providers was a replica of his cousin, President Akufo-Addo.

According to them, the situation is not different from government’s newly introduced taxes, such as the Communication Service Tax, Petroleum tax, among others.

Therefore, if traders are finding ways to make ends meet in this tough economy, ‘overcharging’ foreign nationals not a bad thing to do.

Making the situation look like a pay back time on the Akufo-Addo government, a tweep emphasised that “they are doing exactly what the government is doing to us, overcharging in taxes, fuel, electricity, water, CST, etc. You should rather beg your cousin to stop overcharging us”.

The Ghana Tourism Authority (GTA) has, however, promised to take action against traders and service providers if found culpable.

Despite these hitches, President Akufo-Addo on Monday deemed this Year of Return initiative a success following the pumping in of about 1.9 billion dollars into the economy.

According to him, “It’s more than I expected. We had hoped that it will have a big resonance but it has had a much bigger resonance than anticipated. It’s a shock alright, but it is a welcomed shock”. 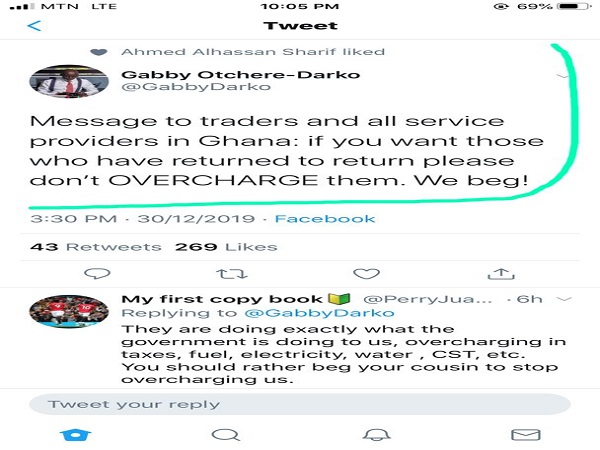 World’s deepest mines to take weeks to reopen after shutdown

Assets declaration documents will be published in my second coming –...

WHO warns public about criminals impersonating the organisation

ADB gets approval to raise GH¢127 million from GAT